Gender Roles in Children’s Literature and Their Influence on Learners

This paper discusses how gender roles are portrayed in children’s literature, the potential impact of these portraits, and how teachers can better use children’s books as a resource in the classroom.

Children are shaped into who they are as adults starting when they are very young. Children adopt certain roles and behaviors as part of their socialization process (Tsao, 2008). They begin to create their own identities and one element that influences this identity is the literature that children read or what is read to them (Allen, Allen, & Sigler, 1993). Children’s literature has been generally defined as anything that children read (Nodelman, 2008), but this is too narrow. In today’s world, it also needs to include works intended for children, young people, and second language learners. Children’s literature is said to provide characters and events that learners can identify with and through which they can evaluate their own actions, beliefs, and emotions (Mendoza & Reese, 2001), and is now being commonly used in ESL/EFL classrooms (Lazar, 1993). Culturally and linguistically diverse learners can be introduced to cultural knowledge and universal themes that are present in the English speaking societies (Department of Education, Newfoundland and Labrador, 2009) because it can give a voice to underrepresented groups and stimulate cross-cultural appreciation (Smallwood, 1998). Thus, children’s literature can have an enormous impact on children and language learners throughout the world, especially in the areas of culture and gender roles.

Gender roles are an important part of culture (Gazda, 2015; Singh, 1998). However, they often differ from culture to culture and it is important for children and students to understand that these differences exist and not to merely believe stereotypes. Trepanier-Street and Romatowski (1999) found that it was possible to influence children’s gender attitudes through children’s literature and related activities. Tsao (2008) notes that picture books also have an influence on gender identities. Books that convey gender bias, or sexism, depictions may have damaging effects on both boys and girls. For example, stereotypical representations of occupations along gender lines may encourage girls to select more traditional female areas of employment. This may lead young women into situations in which they are subordinate. It is hoped that the discussion of such a controversial issue can stimulate teachers to rethink what and how they should teach in the 21st century classroom (Kuo, 2005).

How Gender is Portrayed in Children’s Literature

Gender bias is present in the content, language, and illustrations of many children’s books (Brower, 2016; Heinsz, 2013; Kittelberger, 2002; Trepanier-Street & Romatowski, 1999). Gender-roles portrayed in children’s picture books influence their audiences, but the magnitude and generalization of this influence and its impact on behavior are not completely understood (Tsao, 2008). Gender bias may be seen in the extent to which a gender is represented as the main character in children’s books and how that gender is depicted (Singh, 1998; Brower, 2016). Weitzman, Eifler, Hokada, and Ross (1972) were among the first researchers to note a greater emphasis on male characters in children’s literature, although more current studies (i.e. Turner-Bowker, 1996) have discovered similar findings. Ernst (1995) researched the titles of books written for children to determine whether or not boys or girls names were more frequently included in the titles. His findings were that boy’s names appeared about twice as often as girl’s names. He also found that books that had a gender neutral name, or a girl’s name, were actually books about boys.

Singh (1998) noted that not only are girls portrayed less often than boys in children’s books, but that both genders are frequently presented in stereotypical terms. According to Ernst (1995), girls are usually portrayed as sweet, naive, conforming, and dependent. In contrast, male characters are usually aggressive, physically strong, possess a sense of adventure, and are able to function in complete independence. Similarly, Temple (1993) found that boys tend to have roles as fighters, adventurers, and rescuers, while girls tended to have more passive roles as caretakers, mothers, princesses that need rescuing, and characters that support the male figure. Rudman (1995) discusses how female characters in children’s novels may start out as active, aggressive, or headstrong, but soon relinquish their independence, or are tamed, by a male character or situation that occurs in their lives. In general, male characters do not do this. Rudman (1995) and Kramer (2001) also found that the female characters were the “nurturers” and often depicted as mothers, nurses, and kitchen helpers. Turner-Bowker (1996) found that the most commonly used female descriptors in children’s books were beautiful, frightened, and worthless. By comparison, she also found the most commonly used male descriptors were big, horrible, and fierce. Further, she found that females were significantly less frequently found in pictures. Kortenhaus and Demarest (1993) found that males are typically portrayed as competent and achievement-oriented, but females are limited in what they can do, and are less competent in their ability to accomplish things.

Unfortunately, it does seem like very little is changing or changing very slowly. In a recent study conducted by McGrabe, Fairchild, Grauerholz, Pescosolido, and Tope (2011), they came to the following conclusion:

One thing that surprised us is that females’ representations did not consistently improve from 1900 to 2000; in the mid part of the century it was actually more unequal. Books became more male-dominated. (p. 197)

Their study was based upon almost 6,000 books published from 1900 to 2000, and came to the following conclusions:

Suggestions for the ESL/EFL classroom

Teachers can make a difference in how children’s literature is used as a resource in the classroom. Rudman (1995) believes it is important for teachers to first recognize and articulate their own attitudes towards gender. Teachers can more extensively evaluate the goals they have for their students and the goals of their program or school. While some may argue that teachers must create lesson plans that directly combat gender bias, it may be more prudent to discuss specific gender issues as they arise or more indirectly incorporate them into lesson plans. The important condition that should be established in the classroom is the awareness of gender issues by both the teacher and the students. Perhaps the best method of incorporating children’s literature and gender issues into ESL/EFL classrooms is through critical thinking activities. By integrating critical thinking into daily classroom activities, teachers can assist students in understanding how texts are constructed (Bainbridge, Heydon, & Malicky, 2009; Gazda, 2015). Teachers can also use scaffolding activities, like graphic organizers, to guide and assist students through these activities.

Children’s books can be used as catalysts for discussions (Gazda, 2015; McGowan, McGowan & Wheeler, 1994; Lowther, 2014), writing activities, and individual or group projects. It is important for teachers to support children’s group discussions by posing thought-provoking questions and facilitating student exchanges (Singh, 1998). During discussions with children, teachers can validate both feminine and masculine voices, and listen to dissenting individual opinions (Trites, 1997). Lenski (2008), states that it is important to understand that texts offer a unique view of the world. Culturally and linguistically diverse learners could be asked to compare and contrast their part of the world with the world in the book or the place in the world where the story was created. Students could also be asked to compare the physical and psychological characteristics of the male and female characters, which are often stereotyped. There are almost endless possibilities for teachers who have a greater understanding of higher level thinking and critical thinking skills.

Children’s literature is a widely available cultural and learning resource. It has the power to influence a child’s identity by making inferences about gender, and gender is perhaps the most basic perspective through which children see and experience the world and their places in it (Taylor, 2003). Books intended for children, and used by ESL/EFL teachers, reflect societal attitudes and maintain discrimination in societies (Rudman, 1995). Unfortunately, as Short (2001) points out, teaching may resemble a political agenda. Kuo (2005) also states that there are no politically innocent books for students and that a classroom is always laden with different values and perspectives introduced by teachers, students, and the texts. Therefore, teachers can take actions to ensure that the learning environment is less gender bias.

Teachers can select books in which the characters have distinct personalities regardless of their genders. Teachers can try to make a conscious effort to select books for students that reflect fairness and inspire both genders. There are also books that offer realistic and engaging stories that address issues of gender and abilities. Over the past decades, increased female representation in titles, central roles, and pictures appears to indicate that more and more authors of children’s books are aware of and sensitive to women’s changing roles (Tsao, 2008). And, although there is now research suggesting very little changes are taking place (McGrabe, et al., 2011), it’s important for children to be exposed to books that can break stereotypes. However, perhaps the most important thing teachers can do is teach children critical thinking skills. Through the development of critical thinking skills, children can develop their own independent thoughts, a greater understanding of societal issues, and become more engaged and responsible citizens in the future.

Gazda, A. (2015). Once Upon A Time: Exposing Sexism in Children’s Literature. Unpublished master’s thesis, The College at Brockport: State University of New York, Brockport, NY.

Short, K.G. (2001). Why Do Educators Need a Political Agenda on Gender. In S. Lehr (Ed.), Beauty, Brains, and Brawn: The Construction of Gender in Children’s Literature. Portsmouth, NH: Heinemann. 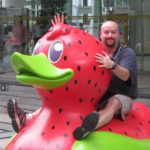 Professor Aaron David Mermelstein is a Washington State certified K-12 teacher with a Ph.D. in TESOL. He taught Middle School and High School ESL before moving to Asia, where he has spent the past 19 years teaching EFL at the postsecondary level and training graduate students to become EFL teachers. His specialties include: classroom management, student-centered teaching, curriculum design, and extensive reading. He is an Assistant Professor of TESOL in the Department of Western Literature and Languages at National Kaohsiung University.