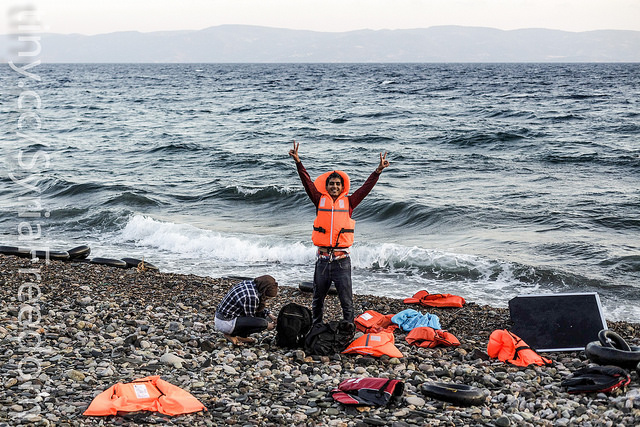 Migrants in Our Classrooms and in Our World

Harold B. Allen Award Recipient: Our compassion is grounded in our own histories, understanding, and respect for the migrants who come in search of new homes for themselves and their families.

At this moment, millions of people are fleeing their home countries, and risking their lives in search of a new home for themselves and their families. We read about them in newspapers nearly every day and see them on the news.  We hear the calls to build walls, close borders, deport Muslims, blame the refugees.  When I hear the fierce and mean anti-immigration political rhetoric in the US and elsewhere, I am incensed because it disregards why refugees flee their home countries, minimizes the dangers they face as they journey, and discounts their suffering as they make new lives in strange and often hostile places.  For the overwhelming majority of people, migration is a leap into the unknown, not a calculation to take advantage of the social services in a new country.

Forgotten is the reality that many people are compelled to leave their war-torn countries and that migration requires enormous courage, ingenuity and perseverance, the very qualities that can make them productive citizens in their new home countries.  Ironically, these are just the characteristics that we in the U.S. value and aim to teach our children.  Yet, in the inflamed discussion of global migration, they are all too often ignored.

But the people and their experiences are not ignored by us ESL teachers who are ready to help new people learn the new language and culture and adjust to a new life.  Many English language teachers have years of experience teaching new waves of immigrants and refugees.  We are skilled, caring, and committed.

We know that migration can be dangerous, difficult, and disruptive.  It requires sacrifice.  At the very least, refugees must cope with the trauma of escape, and face the loneliness and insecurity of cutting the safety net with family and community back home.  They piece together multiple jobs to make a living in the new country, and sometimes experience wrenching reduction in financial and social status, often for the sake of providing a better life for their children.  Despite the struggle, they keep coming.

We understand, we care, we teach

When our students get discouraged, we remind them of the difficulties they’ve overcome and we point to the powerful skills they exhibit day after day.  When we ourselves get disheartened, we do the same.   For encouragement, we tell our students about the Somali doctor who treats patients in our clinic, the Eritrean refugee we saw graduate from community college and get an IT job, and the Hmong elementary school teacher who was our student not very long ago.  When we hear refugees belittled by others, we teach about our students: We tell our students’ stories and talk about their courage, emphasizing the time and effort it takes to learn a new language, find work, and make a contribution to their new home community.  And we ask, “Could you do it?”  We lobby our legislators to press for humane immigration policies and sufficient funding of our ESL programs.

We remember our own stories

We know about the refugees’ bravery because they tell us their stories of escape and because many of us know that our own refugee families were courageous.  In my case, my mother and her parents escaped from anti-Semitic pogroms in Russia in the 1920s and if not for US authorization to enter the country, and help along the way, the family may very well have perished.  I remember well my mother Ruchel’s story of how she saved her family from murderous soldiers (Anna was her little sister; Leah and Avram were her parents):

Warned that they’d soon be attacked, Leah, Avram and Anna fled to the basement of their house and, as per the plan, Ruchel went to bed in a room upstairs.  I can picture the family huddled in the corner of the cold, damp basement, woolen coats wrapped tightly around Anna, listening to the soldiers’ footsteps above them. Arrows of fear pierce their many layers of clothing and leave them shaking. Surely they are aware that Ruchel might be raped or killed?  How do they keep little Anna quiet?  Are they ready to die?

How had they prepared Ruchel?  How did they impress on her the importance of her job without scaring her?  Was she conscious of the danger?  How did she maintain her focus and calm?  Had they scripted her lines and rehearsed them?  I wish I knew.

When the Cossacks arrived and found my mother, she told them that she was the maid’s daughter, that she was sick, and that the goddamn Jews had fled.  Miraculously, the Cossacks believed her, and after looting objects within sight, they stomped out and the family was able to escape to the train station, their valuables wrapped at their waists.  A soldier approached Ruchel and attempted to search her, but she vigorously protested that she and her family were Russians, not Jews.  To test her, officials had her repeat a Russian sentence, filled with words starting with the letter “r”, a sound that would spot a Yiddish- speaking Jew.  Once again, Ruchel passed the test, saving the family, who mounted the train for Warsaw, the first step of their journey to America.   She was nine years old.

For me, and for many of you, teaching ESL is personal.  It’s a calling. As we teach, we think about how, with a twist of fate, it might have been us or a family member sitting in the classroom learning English and we are determined to create a warm, secure, intense, and welcoming place for our students to learn. We acknowledge, respect, and nurture the personal strengths that have made it possible for the students to learn and thrive.

Would we be brave enough to do the same?

On a recent trip home from Cuba, my husband Peter I experienced a few fearful hours when the Immigration Officers at the Miami airport stopped Peter from entering the country because of a passport irregularity.  Though we assumed that Peter would have a chance to explain the situation and ultimately be allowed in the country, we were nonetheless worried and alarmed when the Immigration officer confiscated his passport and directed us to wait in a large windowless room.  With us were about 50 other people, families and young women and men with whom we felt immediate empathy.  We knew that each person had a story to tell, a compelling reason for leaving home.  We wondered what they had experienced as they journeyed and how they managed.  What were they sacrificing?  What lay ahead? Would they be deported? Would they be my students?  What might they or their children contribute if they were welcomed to the U.S.?

A few hours later, Peter was cleared to enter the country and we gratefully returned home.   But the experience in the Miami Immigration and Customs Enforcement  waiting room has stayed with us.  We think of the migrants and wonder what has happened to each of them.  We marvel at their personal strengths and courage, to journey to a new country, learn a new language and start a new life.  Would we be brave enough to do the same? 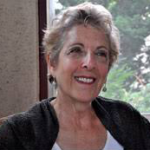 Lynne Ackerbeg was the director of the former Minnesota English Center at the University of Minnesota for many years. Today she teaches part-time at the Minnesota English Language Program. She received her B.A. from Antioch College and her M.A. from the University of Minnesota. Lynne is a volunteer English tutor at the Center for Victims of Torture. She is also a Career and Language Coach, who specializes in clear language and communication.