To reduce “othering” and the monetary burden caused by remedial courses at home universities and colleges, and being equally financially responsible for tuition fees as mainstream students, resident second-language (L2) students need to be provided with certain support and assistance by writing instructors and writing center personnel.

The number of non-native/foreign-born residents in the United States reached 44.4 million in 2017, accounting for 13.6% of the total U.S. population (Radford & Noe-Bustamante, 2019). According to the 2017 statistical data of the United States Department of Education, 29% of all bachelor’s degrees were conferred on foreign-born resident students; this is almost double what was attained (16%) by this group of students in 2012 and represents almost one third of the entire U.S. student population that universities and community colleges serve (Arbeit et al., 2017). Unfortunately, these resident students with different linguistic and academic support needs are usually placed in classes with F1 visa holding international students. Students who hold F1 visas plan to visit the United States to pursue undergraduate studies, and usually, this course of study is their first exposure to the U.S. educational system. Though they have distinct backgrounds and needs, both groups are offered similar remedial English classes to prepare them for other content-based classes (Schwartz, 2004). This paper addresses the knowledge and skills that current writing instructors and writing center tutors1 need to know to accommodate foreign-born resident students, sometimes referred to as Generation 1.5 students. This paper focuses on describing how university programs can support the linguistic needs of resident second-language (L2) students in a way that facilitates more rapid participation in mainstream content-based classes without having to take non-credit bearing classes or extra credits that do not count towards graduation. The paper also problematizes the labeling of these students as Generation 1.5 and as English as a second language (ESL) learners; such labels add more non-credit bearing or remedial English for academic purposes (EAP) and/or ESL classes to their study program.

Who are the “generation 1.5 students?”

Depending on the age of entrance to the United States, immigrant students are classified in one of these three categories: adult newcomers (Generation 1.25), adolescent newcomers (Generation 1.5), and child newcomers (Generation 1.75) (Arbeit et al., 2017; Rumbaut, 2004). The term Generation 1.5 was first coined by two sociologists, Rumbaut and Ima (1988), originally to refer to students who moved to the United States from Asian countries during their childhood because of different reasons, such as their parents’ study, job, migration, and so forth. Technically, they are referred to as such because they fall between two generations: they neither belong to the first-generation adult immigrants nor belong to the generation of newly born children in the United States. They can be defined as the generation between the immigrant “parents” and the “sibling” generation who are born in the migrated country (Doolan, 2010). In this paper, I specifically focus on the Generation 1.5 population in the U.S. higher education context because these students are generally viewed as having specific characteristics of L2 learners who are particularly different from native speaker (L1) students of English and international F1 visa holding students who travel to the United States with undergraduate degree pursuits (Ferris, 2009; Reid, 1997).

Criticism of the term

The term Generation 1.5 has been used extensively since its coinage but also became the center of hot debates as the term is “used to emphasize students’ linguistic and academic deficits instead of resources and potential” (Kibler et al., 2011, p. 203). Benesch (2008) argues that the term Generation 1.5 is related to discourses of partiality, such as demographic partiality (deficient identities of first and second generations), linguistic partiality (deficient abilities to speak and write the English language and their native language), and academic partiality (not ready to attend college or do college work). Ortmeier-Hooper (2008) also found the label to be problematic for students as this institutionalized marker makes them feel like a “disadvantaged second language speaker” (p. 394). Sadly enough, non-white representatives of this student group are even associated with discourses of racism and marginalization (Faez, 2012).

The term Generation 1.5 is a label which signifies not only the immigration status of students but a linguistic one too. However, when these students are placed with F1 visa holding students in one class, they are tagged with an additional ESL label which becomes an indicator for college administrations to continue placing these students in remedial EAP/ESL courses. The additional ESL label also represents the resident L2 students as “novice” in language acquisition (Ortmeier-Hooper, 2008) as if they are in need of additional language training even though resident L2 students receive at least secondary education at U.S. schools (Goldschmidt & Miller, 2005; Schwartz, 2004). Due to the associated deficient discursive assertions and views with respect to their linguistic abilities, several scholars initiated using less discriminatory and less label-like notions, such as “US educated language minority students” (Bunch & Kibler, 2015), “long-term resident L2 learners” (di Gennaro, 2016), “bilingual writers” and “resident L2 writers,” (Doolan, 2017) or “resident ESL students” (Matsuda & Matsuda, 2009) to define these students. In this paper, I will refer to this group of students as “resident L2 students.” This term is relatively free from bias and labeling as it does not intend to alienate the group and does not create as much “otherness,” in my opinion. The term indicates that these students are “insiders,” or, to be exact, residents who have lived several years in the United States and not newcomers anymore. This term also indicates that they speak at least one language other than English, and only this language acquisition track makes them different from other monolingual students.

In addition, the resident L2 students who are placed in ESL/EAP remedial classes will need to bear the consequences of this placement in terms of a loss of time, money, and degree aspiration. Even though ESL classes might be counted as credit-bearing classes, they may be not counted towards graduation credits; therefore, necessitating to take ESL/EAP writing coursework prevents resident L2 students from finishing their undergraduate degrees in a timely fashion (Bailey et al., 2010; Bergey et al., 2018). Enrolling in additional classes also takes a toll on financial resources for resident L2 students (Bunch et al., 2011). Consequences like monetary burden and time loss arise when resident L2 students are placed in multilingual ESL classes along with the F1 visa holding students despite their prior education in the United States and their linguistic competencies.

Many scholars mention that resident L2 students are equipped with social skills in English; they are highly praised for being able to communicate in a “native-like” manner and often appear in conversation to be native English speakers, yet they are criticized as less skilled in the academic language associated with school achievement, especially in the area of writing (Harklau, 2003; Bergey et. al., 2018). Academic English is also challenging and the main gatekeeper for mainstream students in their success in a new educational context. Yet nobody questions why mainstream students are not placed in remedial EAP/ESL classes for not being familiar with or aware of academic English despite the fact that native speakers of English and non-native speakers of English such as resident L2 students and F1 visa holding students find the academic language equally challenging.

First-Year Composition writing instructors and writing center tutors can use the following recommendations to assist resident L2 students towards meeting this student group’s linguistic needs. First and foremost, they need to take into account the fact that L2 resident students spend their formative years in U.S. schools, and neither ESL nor EAP remedial English classes are designed to meet this population’s needs. In fact, EAP/ESL classes are designed for international F1 visa holding students and embedded with cultural awareness instructions (Schwartz, 2004). Therefore, universities should design writing courses with tailored support to improve resident L2 students’ linguistic and writing performance (Bergey et al., 2018). Yet, due to the small number of enrollments, the universities may consider placing resident L2 students with mainstream students. In this case, writing center tutors can be great assets when and if the students are in need of writing support.

Though it can impose a financial burden on the university budget, a special section of a composition course dedicated solely to resident L2 students is essential to support them in both language and writing instruction. The resident L2 section of a First-Year Composition seminar course would have features as listed below.

Writing centers can be a great asset to resident L2 students in their success when they are taking a First-Year Composition seminar class with mainstream students. To that end, the writing center tutors should be aware of the resident L2 students’ study weaknesses and strengths, and they should be informed of the following strategies for productive tutoring sessions:

Similar to all students, resident L2 students go to universities to earn degrees, to increase their knowledge, to realize their dreams, their parents’ dreams, and to pursue dream jobs, to name a few reasons. In this journey, their academic success does not only depend on them but also on every interpersonal relationship or link they build up during their academic journey. The link between these students and their composition teachers and the link between these students and writing center tutors can cause change and improvement in their academic writing performance when these support links are knowledgeably equipped to serve them. All suggested practices to First-Year Composition instructors and writing center tutors are learner-directed and relevant to students’ interests, challenges, and needs. As long as the relevance is maintained, the approach to support these students will be influential. Once the approach is influential, a positive growth is surely to occur.

Several implications for this influential approach to foster writing performance of resident L2 students can be drawn from the paper. First and foremost, the terminology that describes the population should avoid labeling and “othering.” The perpetuation of the term Generation 1.5 is deficient and discriminates against this group from other students.

Despite being bilingual or multilingual, resident L2 students have deeper knowledge in the English language (e.g., they have taken content subjects in English; they are familiar with pop culture, slang culture, etc.), yet they have to be given the opportunity to push their academic English with the strategies recommended above, so, students do not need remedial coursework to that end. Apart from writing instructors, the writing center tutors can be a great advantage for them. The one-on-one interactions with writing tutors can be more efficient if the tutors pay close attention to how to write rather than balancing corrective grammar errors, rhetorical style, and genre awareness in a particular assignment (Thonus, 2003). While some studies confirm that writing performance is not the main component of students’ success in college, it certainly assists in developing their critical reading skills, which will be an advantage in other classes too.

In conclusion, this paper intended to provide suggestions for writing instructors and writing tutors on how to approach resident L2 students and how to better serve this group of students. It is time to look at them as residents who should not be “othered” in their home country and who should not be taking remedial ESL/EAP classes to develop their language skills to “deserve” their seats in mixed content-based classes after their completion. With some support from writing instructors and tutors as suggested above, resident L2 students can reach academic success without delay and accomplish as much as all students are expected to. 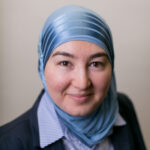 Nasiba Norova is a Ph.D. student in Applied Linguistics at the University of Massachusetts Boston, specializing in L2 composition and bilingual education. She also works as a research assistant and ESL instructor at UMass Boston. Her research interests include resident L2 students’ writing performance, Global/World Englishes, racial literacy, and critical pedagogy.